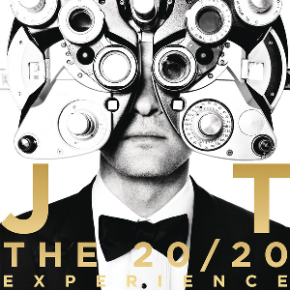 I’ve read few pieces criticizing The 20/20 Experience. Negative reviews from NME and The Guardian summarize its worst aspects – namely, the songs are all about three minutes too long, and the lyrics are poor throughout. But there’s still so much to say about The 20/20 Experience that it justifies a four-month late reflection.

The most interesting thing about 20/20 is the way it revises JT’s supposed strengths. It poses him as a playboy with an endless falsetto and a secret, vulnerable well of heart. His vocals have transformed, R. Kelly impressions rather than his classic N*SYNC formula. And the notable arrangements are stuttery Timbaland stoner jams (“Don’t Hold The Wall,” “Tunnel Vision”) and Luther Vandross throwbacks (“Suit & Tie,” “Pusher Love Girl.”)

But this belies the true story; before JT and 20/20, Justin sought to bridge the difference between love songs and sex jams on FutureSex/LoveSounds. The most marked difference between the two albums is the positioning of Justin as a romantic lead. On 20/20, he’s the star; he objectifies the woman, positioning himself as the one who brings pleasure to “you.” But on FutureSex, he’s obsessing over the girl; even when he’s bringing “SexyBack,” he does it in shackles, not in a suit and tie. The most he used to muster was humming the opening of his old rivals’ “I Want It That Way” in an outro; now, the girl is a reflection of his own worth rather than his idol. His persona, lyrical strengths, and voice all fit his old style better; he’s far more interesting as a sub than a dom, and his voice doesn’t compete with the crooners who he imitates on 20/20.

Neither revision is ubiquitous. “Pusher Love Girl” and “That Girl” both strip JT of his power. The psychedelic repetition on the breakdowns (“J-j-j-j-junkie for your love” and “You are, you are, the love, of my life”) are all a stoner haze away from Justin’s a capella, even if the down-pitched vocal effect is a bit more Timbaland. In fact, on “Mirrors,” the breakdown bares sincerity.

There are some great moments. The Timbaland spoken word breakdown on “Don’t Hold The Wall” is a fascinating groove; the bossa-nova coda to “Strawberry Bubblegum,” is fun even through lyrical insipidness. One more: “Blue Ocean Floor” is the strongest lyrical work on the album. The imagery of parsing a lover’s voice through endless static is sold sincerely. Its arrangement, half “Revolution 9” and half Frank Ocean, recalls the “What Goes Around/Comes Back Around” interlude and makes for a sweet and compelling ending.

Yet 20/20 never coheres to anything singular. Multiple songs fall short; “Spaceship Coupe” fully fails to deliver Justin as a sexually compelling icon. Containing lines like “And with the top down we’ll cruise around/Land and make love on the moon” it falls into the same puerile traps songs like the original “Ignition” fell into years ago. “Let The Groove Get In” is an interminable take on “Wanna Be Startin’ Somethin’” that adds nothing to the conversation. Both “Tunnel Vision” and “Strawberry Bubblegum” run three or four minutes simply content with being pleasant before becoming interesting.

On most albums, a series of “fine” songs would be saved by the presence of a few classics. But on this 70 minute album, those songs seem to last forever. And the “classics” are more remarkable for pop craftsmanship than ambition or innovation. To put it another way, the best songs are more “Bump N’ Grind” than “Trapped In The Closet,” more Usher than Frank Ocean, more “Let’s Get It On” than “What’s Going On.”

Brevity wouldn’t have made 20/20 a “great” album. But at its length, it’s a hard album to even recommend; so much runs too long, and most of its best songs gain little from the album format (sorry, “Blue Ocean Floor.”) Those that are open to closing your ears to Justin’s lyrics and simply letting the groove get in may find a lot to like, but most people will probably get antsy waiting for Justin to get out of his seat.

HIGHLIGHTS: “Pusher Love Girl,” “That Girl,” “Mirrors”
NOTE: While there’s a radio edit for “Mirrors” already, the most interesting portion of the song was cut. Get the full version.

NEXT STOP: Write Me Back, R. Kelly

AFTER THAT: Never Too Much, Luther Vandross

BANGARANG
Skrillex
2011
Big Beat, Atlantic
Prod. by Skrillex et. al
Full disclosure; I’ve reviewed Bangarang before. At the time, I focused on its song-by-song merits, and I found a lot of the album uncreative, too similar to what Skrillex had done before. But time has passed, and many of the songs I so despised on Bangarang are songs I warmed to over time. It was one of my earliest reviews, and I felt it was time for a re-evaluation.
The last time I listened to “Right In” must have been almost a year and a half ago; playing it again, it’s one of Skrillex’s absolute successes, with some fantastic synth details and vocal snippets. The dubstep movement (of which Skrillex is simultaneously described as the leader and the Antichrist) didn’t dominate pop music for more than a year or so, and so over-exposure to his style clouds the record less. It’s apparent that Skrillex’s real successes were generally in his contrast of wobble-bass and his treble synthesizers and vocal snippets, not in his (un)willingness to break from 4/4 or his use of the dubstep format.
Genre classifications are usually damaging this way; in trying to evaluate Skrillex for what he had done in the past and for his genre’s focuses, it’s easy to ignore a lot of what makes the album compelling. Rather than discuss whether Bangarang is “true dubstep” or “brostep” or “electro,” or worry whether “EDM” is actually dance music, or whatever, I’m gonna establish the term “electronica” for all music mostly focusing on synthesizers.

And, in that regard, Skrillex brings some real fire to Bangarang. “Breakn’ A Sweat” is a fun, simple track invoking high-energy Doors songs (albeit with samples from “Light My Fire”) and “The Devil’s Den” brings back the darker melodic elements of Scary Monsters and Nice Sprites. He combines rapper Sirah with the frenzy of “Bangarang” to fantastic fervor.

Some things don’t work quite so well, though; “Right On Time,” while a really cool experiment, runs about a minute longer than it needs to, with a build-up running through to its close that ultimately falls flat. “Kyoto” uses Sirah less effectively than its predecessor, and it’s musically pretty boring. The metal power chords on the same song are  cheesy, though they lead to a pretty good ending breakdown. And “The Summit,” a very pretty omen of Avicii’s eventual radio domination and collaboration with then-girlfriend Ellie Goulding, is overlong, running out of steam a good two minutes before its close.
Still, it’s shocking how much of the album still holds up in a modern context. I wouldn’t call it “cohesive” (the first four songs match with each other in a way the last three don’t) but it’s a sonic playground all the way through. Whether Skrillex was the Brutus of the dubstep movement or it’s taking a short slumber, he delivered a pretty slick dance record in Bangarang, and one that will likely stand as a decent reminder of why we all listened to this stuff in the first place.
4/5
HIGHLIGHTS: “Right In,” “Bangarang” (ft. Sirah),
MISSED OPPORTUNITIES: “Kyoto,” “The Summit (ft. Ellie Goulding)”
CATALOG CHOICE: Scary Monsters & Nice Sprites
NEXT STOP: Disclosure, “Settle”
AFTER THAT: Susumu Hirawasa, “Paprika OST”
Curious about the score? Check out Alex’s page on the subject.