The game hangs in sounds easily remembered and in feelings of genuine shock. In piano tinkling out of a band practice room, in murmurings about what lives at the bottom of the well, in a tattoo of the golden Triforce. Other Zeldas can lay claim to some of this ferocious energy, but until Breath of the Wild stole Olympian fire, no other Zelda would ever conquer a Reader’s Poll but Ocarina of Time.

Today is its 20th anniversary. Two decades gone. We have come back full circle. The most beloved games of 2018 all openly wear its colors. God of War is now an environmental puzzler with lock-on behind the back combat. Red Dead Redemption 2 officially turns the series outward toward digging through cranny and nook as its most ardent fans drop off the main storyline one by one. All that keeps Monster Hunter World from carrying the Zelda costumes presented in Monster Hunter Generations Ultimate is its lack of a Switch release.

I have been grappling with Ocarina of Time since its release. I have experienced envy, fury, pride, dejection, frustration, abandonment, and, eventually, acceptance with Kokiri Forest and the Hyrule that it calls home. Once the height of imagination and grandiosity, it sits now like an empty dollhouse, the furniture gathering dust.

In the past, I’ve wantonly made public my apostate perspective of Ocarina as “the worst 3D one.” I cite the obtuse adventure-game logic of its occasional difficult puzzles (find the sword in a hole in the wall behind the sword training center, a place useful for non-sword owners; use gravity to fall on web one and only one time – an environmental object’s ability to bear your weight will not return as a mechanic,) the simplicity of the rest, the ugly emptiness of its dungeons, and the resistance of beautiful weirdness.

This was inspired by a friend I’d suggested play the game as her first Zelda. She loathed the experience. Another friend and I set out to replay the game and found ourselves powerfully critical. What wonder it once held to our child’s eyes was replaced with repulsion. “This” was the game being held above so many we loved, above even those we still loved from that dusty N64?

Yet this rejection too was that immaturity that stops the high school student from seeing the animated films they loved all their childhood. We refused to admit how much of the game was simply bound to our code at that time. We could not imagine fumbling with the controls any longer, now bred into full literacy. We could not feel that pride at mastery we once developed as kids. We could not hear the shop music as anything but a jingle used by YouTubers to entreat the likecommentsubscribebelow.

Twenty years. Two decades gone. Under a blanket, on my partner’s sister’s sofa, I meditate on the little Kokiri shopkeeper. He seems almost casually overfamiliar while also seeming uncaring. Maybe he’s distracted because he can’t stop bouncing to peek over the countertop at his customer. I love this lil’ guy.

Remember how messy the river to Zora’s Domain is? This cavalcade of horrible eel-like geometry that you have to traverse to reach Princess Ruto, the King, Jabu-Jabu?  They would repeatedly veer back and forth on how much of a Mario game should be in a Zelda game since. Geographically, it creates this place where as Din molded the earth into stone, some part of the earth grasped out against her.

I suppose what makes Ocarina of Time so difficult to grapple with is that unlike prior Zelda games, it no longer seems like an abstraction but a world. But unlike later Zelda games, its characters only have the basest desires and no driving ethos. The dollhouse comparison seems apt; it is a populated field with no life. It is a house without a home. 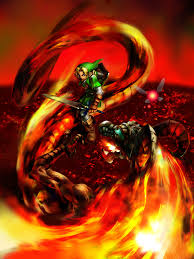 And then there’s the Happy Mask Salesman. The jogging man who just wants a worthy race. King Darunia’s Epic Boogie to Saria’s Song. The yellow-greens of the Lost Woods. That Gerudo Valley flamenco, that race’s uncomfortable fusion of Romani and Arabian culture. Ingo, the Waluigi of Lon Lon Ranch, that insidious younger brother who throws in with King Ganon.

I have been grappling with Ocarina of Time for twenty years. Two decades gone. I do not expect to answer its questions today. But, well. I’ve put its name in my mouth a lot these last eight years. I can take a little more time to put respect on its name.